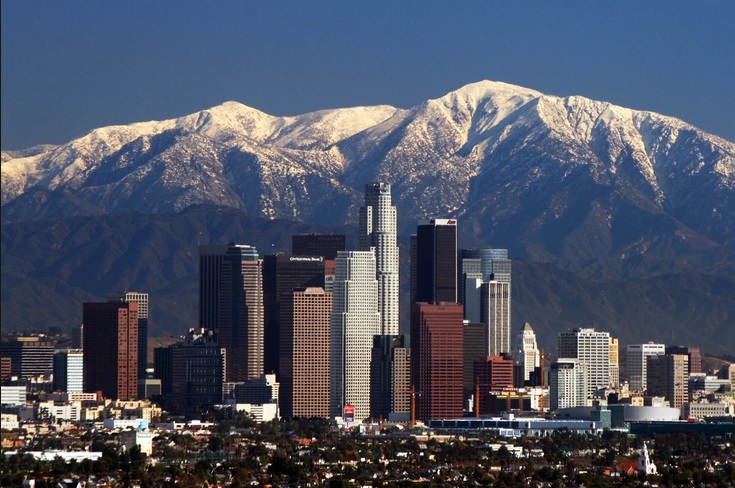 Although Los Angeles and Las Vegas are just 269 miles apart, they are worlds apart in other ways, as their nicknames suggest. Traveling from “The City of Angels” to “Sin City” transports you from the beautiful California coastline and surfing beaches to the heart of Nevada’s Mojave Desert, passing some interesting milestones along the way.

Some of the main thrills of taking a trip to Las Vegas include the 24-hour entertainment, gambling, shopping, dining and casinos that Las Vegas is famous for. Billed as “The Entertainment Capital of the World”, Las Vegas is a great place to escape to for a long weekend, especially in the cooler months from October through May.

Benefits of Traveling by Bus from LA to Vegas

The route between Los Angeles and Las Vegas is mainly along Interstate 15 – a long and tiring drive. For less than the cost of gas for the trip (and about 80% cheaper than the standard air fare), you can book a seat on a luxury bus then sit back and enjoy the passing scenery.

Taking the bus also means you’ll save on expensive car parking fees that many hotels and shopping centers charge in Las Vegas. Getting from your chosen drop-off point is easy by taxi, or arrange with your hotel for a free pickup using their courtesy shuttle service. If you are staying at Harrah’s Hotel and Casino, Plaza Hotel and Casino overlooking Fremont Street, or the California Hotel and Casino, you can be dropped off right outside the door.

Greyhound, MegaBus and other luxury bus services that regularly traverse between Los Angeles and Las Vegas have all mod-cons. Amenities include Wi-Fi, power outlets, reclining seats with ample legroom, air-conditioning and an onboard restroom. Some companies also offer onboard movies, snacks and beverages.

Board the bus at one of the five departure points scattered around Los Angeles. Depending on your chosen route, the journey takes just over five hours door-to-door. Here are some of the landmarks to check off along the way.

Once you leave the city traffic behind, the route climbs uphill. It cuts through the scenic San Jacinto Mountains with the San Bernardino National Forest to the east and the Los Angeles National Forest further west. These forest reserves are popular for hiking, trail riding, off-road vehicles, bicycling, camping, fishing and other outdoor recreation. In winter, due to the high elevation the area is popular for snowshoeing and alpine skiing – not quite what you expect in Southern California! The national forest areas protect the habitat of wildlife such as bighorn sheep, bears, birds, squirrels, deer, reptiles and amphibians including endangered Southwestern Arroyo Toads.

Big Bear Lake, Lake Arrowhead and Silverwood Lake are well-known vacation destinations within the San Bernardino National Forest. There is also a Wild Trout Stream at Deep Creek and some Thermal Springs.

The next main town you will pass through is Victorville, known as “The Key City of the High Desert”. The city was the home of the Victorfield Army Airfield during World War 2 and later became the Georges Air Force Base until it was decommissioned in 1992.

Historic U.S. Route 66 runs through Victorville and is marked on South D and 7th Streets where the California Route 66 Museum is located. The boomtowns that grew up to service Route 66 are still popular as film locations, particularly for westerns, military dramas and action films.

Victorville marks the southern edge of the Mojave Desert, so you will notice a distinct change in the landscape and vegetation. Desert plants lining the road include cacti, creosote, yucca and the weirdly shaped Joshua trees. This area is much hotter than Los Angeles in summer and has cool dry winters when overnight temperatures frequently drop below freezing. Annual rainfall is just six inches, although in January 1949 Victorville did have 38 inches of snowfall!

The higher elevations of this desert region of San Bernardino County have led to it being called the High Desert. It is typically windier and colder in winter than the Low Desert region of the Mojave.

Barstow is a major landmark for travelers heading to Las Vegas. It is the halfway point of the journey – 130 miles northeast of Los Angeles and 125 miles southwest of Las Vegas on what was known as the Mormon Corridor. Barstow marks the intersection of I-15 with Route 66, the I-40 heading east to Flagstaff and S.R. 58 heading west to Bakersfield.

If you are a fan of old-fashioned ghost towns, you may want to return at a later date to explore the Calico Ghost Town just outside Barstow. It was built in 1881 to accommodate the miners arriving to make their fortune from the silver strike. By 1904, the mine was played out, but the historic town remains as a fascination tourist attraction.

After Baker, your route to Las Vegas skirts the western edge of the Mojave National Preserve which was formed within the Mojave Desert to preserve the region’s natural and cultural resources. Wildlife is abundant, so keep your eyes open for golden eagles and hawks soaring in the desert thermals. You may also spot mule deer, coyotes, bighorn sheep and desert tortoises that roam this arid area in search of water, food and shade.

If you are passing through after a rare rain shower in April or May, the desert will be transformed with a beautiful rainbow of short-lived desert flowers.

Primm marks the border between California and Nevada. Once in Nevada, the route is lined with casinos, motels and outlet shopping malls. After 43 more miles, the bus arrives at its destination in Las Vegas. There are six official drop-off points around this glittering neon city, which is the complete antithesis to the arid desert and upscale coastal city of Los Angeles you left behind.

Your email address will not be published. Required fields are marked *

You can find out more about which cookies we are using or switch them off in settings.

This website uses cookies so that we can provide you with the best user experience possible. Cookie information is stored in your browser and performs functions such as recognising you when you return to our website and helping our team to understand which sections of the website you find most interesting and useful.

Strictly Necessary Cookie should be enabled at all times so that we can save your preferences for cookie settings.

If you disable this cookie, we will not be able to save your preferences. This means that every time you visit this website you will need to enable or disable cookies again.

This website uses Google Analytics , Statcounter & Histats to collect anonymous information such as the number of visitors to the site, and the most popular pages.

We Use Social Sharing to networks by addthis share buttons

Please enable Strictly Necessary Cookies first so that we can save your preferences!